Everything in the newspaper is old news. So, can newspapers really help investors who are looking forward trying to see what they think will be happening in the future? The answer is yes, but not in the way you think.

In last week’s blog, “The Window of Opportunity is Closing and Quickly”, I wrote about how inflation reports from a number of countries were raising alarm bells and the changes to my prediction analysis.  In that, not only did I see an increase in interest rates on the cards sooner rather than later but that reductions in quantitative easing were necessary to claw back money being released into the markets to bring money flow under control.  This indicated to me that the economic boom being predicted for 18-24 months in the future was likely to be a much shorter period of time.  This would have a major impact on the price of gold and silver which are traditional safe havens.  I predicted the price of both precious metals more likely to start increasing sharply in the latter quarter of 2021. Hence, the window of opportunity to make money in Gold and Silver, or to even acquire more holdings to protect current investment levels at an affordable level is very narrow.

While this was controversial on Monday with a few people accusing me of scaremongering it was interesting to note that on Thursday The Guardian Newspaper published an article about hyperinflation and suggested interest rates will go up sooner rather than later.

This was followed in more mainstream newspapers over the weekend with articles about how back in the 1980’s and even earlier in the 1970’s interest rates of 14% – 15% or even higher, killed many people’s dreams of homeownership even forcing them out of their homes and into bankruptcy.

The newspapers have jumped on the bandwagon of hyperinflation and increases in interest rates quite quickly.

One thing I have learnt over the years about the newspapers is that once they jump on the bandwagon about the best performing asset to invest in, or where the next boom is, the general public listen to the papers and start investing in the asset.  As an investor it is a signal to start selling the asset and take profit.  With the profits, investors then start looking for the out of favour investment assets to buy.  This is the buy low sell high strategy that helps many investors make money over the long term.  Vice Versa, when the newspapers start saying the price is going down and now is the time to sell, mass panic sets in, general public sell forcing with price down.  Investors are there in the background waiting for the opportunity to buy cheap assets. 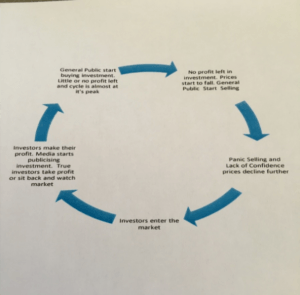 Newspapers also have a way of validating your assumptions about future movements.  As I said previously, there was a suggestion by some people that I was scaremongering last week with the blog, suddenly because it appeared in the newspaper, just a few days later, my blog is now a more credible article with some people starting to take notice of it.

When it comes to analysing the markets there are always patterns that repeat throughout history. By becoming a student of history as well as maintaining your own data and regularly reviewing it you get an idea of where the markets are in relation to historical data.  This helps with predictive trends for where you think the markets are likely to go in the future.  As for the actual timing of your predictions, just watch the newspapers.  As once they start publishing articles about the direction an investment asset is likely to go you just prepare to take a contrarian stance, this allows you to take profit by selling or being able to buy into the asset at a low price.

Can newspapers help investors?  Yes, definitely, they help to crystalise the actual timing of events you predicted when you were analysing your data.